Hacking Team RCS Analysis - (or is that 'Hacked Team'?)

The Internet is a very dangerous place to be. This is true for everyone, from your humble user right up to a boutique security firm specialising in writing nation-state grade espionage platforms. 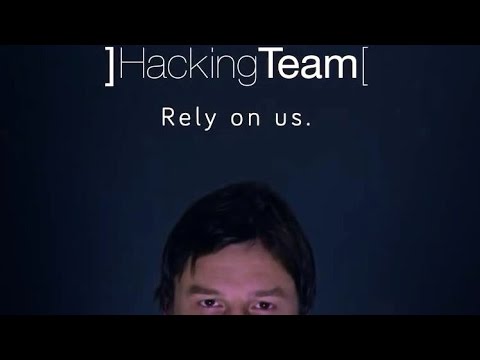 The hackers proceded to leak 400GB of internal sensitive data from Hacking Team's networks. If the irony has not yet sunk in, here's a leaked email referencing the hack of Gamma Group (Another company not known for it's pre-sales vetting process). The Gamma Group hacker (who goes by the name of "Phineas Fisher") has since claimed responsibility for hacking 'Hacking Team'. 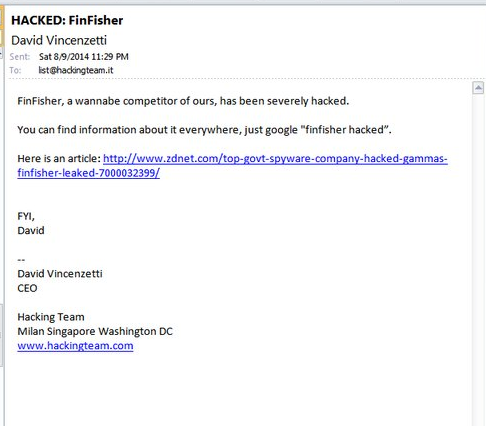 Whilst reading emails and documentation is all well and good, of more interest is source code and binaries contained within the dump. Hacking Team's primary product is the 'Galileo Remote Control System' or RCS for short, and pretty much the entire source code has been released. Why are we looking through another company's internal documents? As network defenders we face a constant battle against threat actors who write highly complex tools to achieve their malicious objectives. Malicious actors will take the source code from this leak and use it to create new tools (similar to the leak of the Zeus source code); as defenders we therefore want to understand the capabilities of these pieces of software, and how to create defences against them.

For most malware authors, their operations are shut down when Kaspersky/Sophos/Symantec releases  a report after having painstakingly reverse-engineered their malware. In Hacking Team's case, we have clear source code and helpful English/Italian comments. We even have installers, designed for the end user (government) to run on their servers. 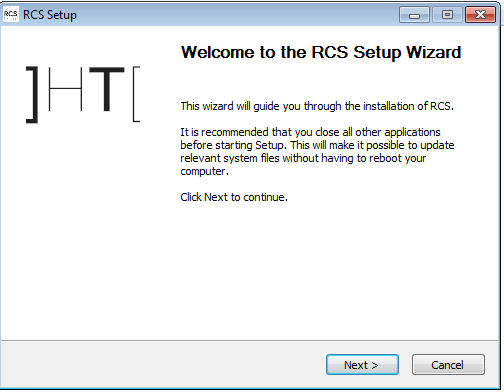 In comparison to traditional malware platforms, the RCS backend has a very modular architecture. Whilst traditional platforms such as Zeus will use a single server as a command and control (C2) server, the RCS has a separate master database, 'collector' instance and console interfaces. 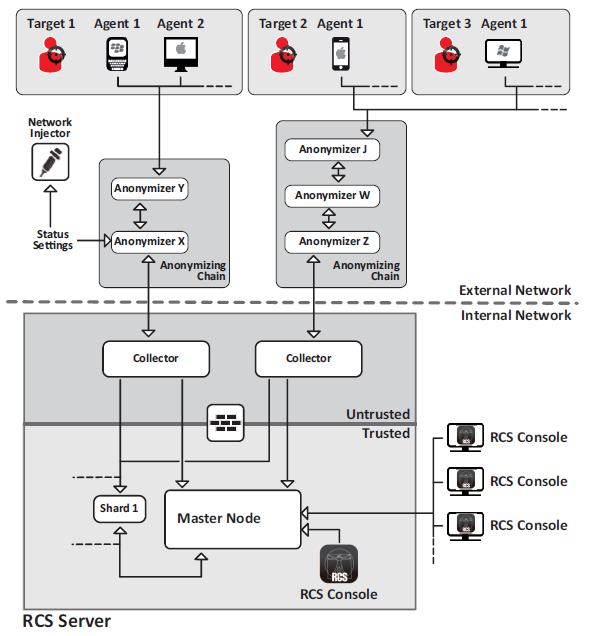 Another interesting element are the 'anonymizers', essentially proxies that compromised machines talk through to get back to the C2 setup.

If you're interested in how they work, don't worry, the source code is all there: 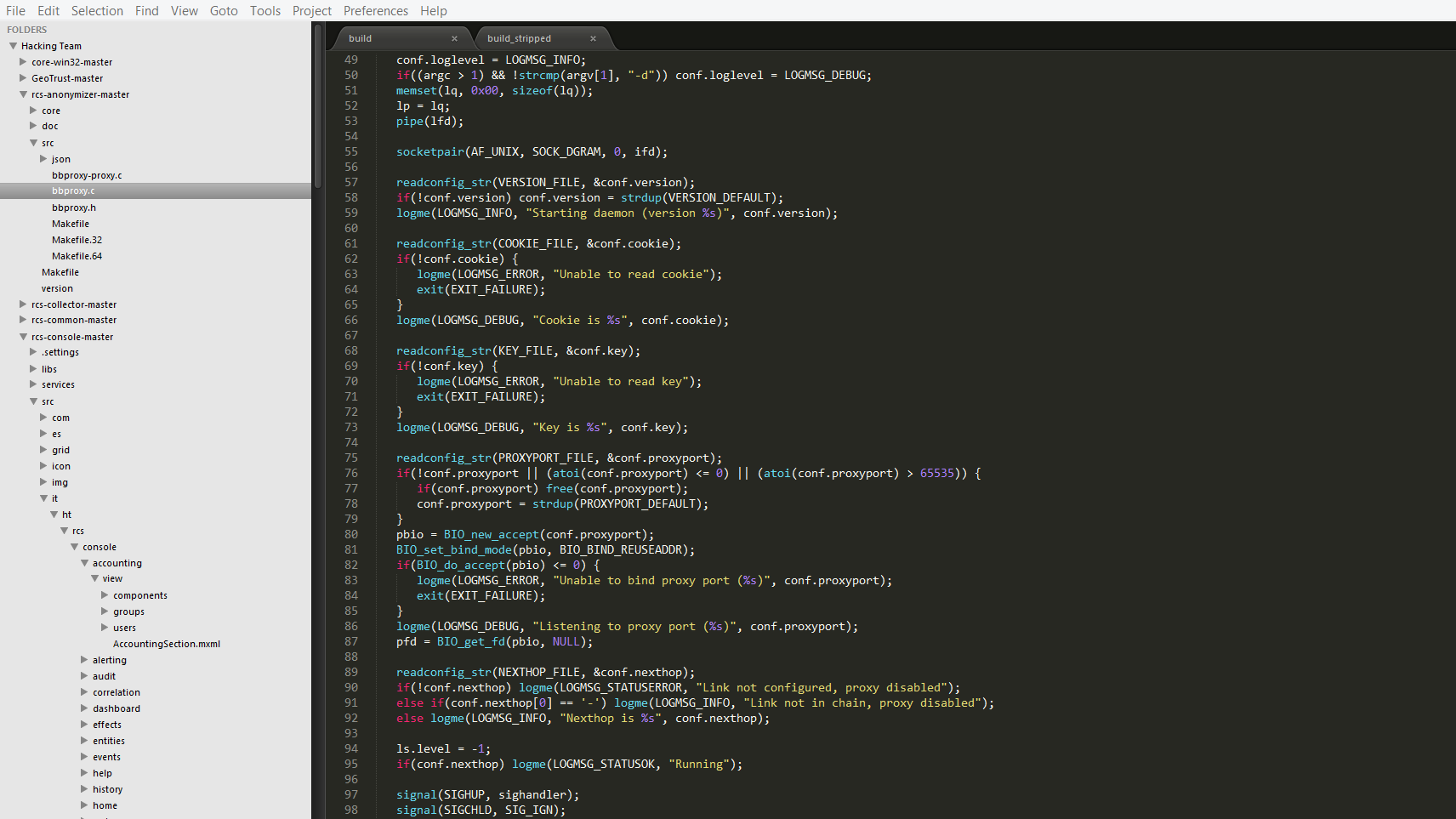 Unfortunately the latest version of the RCS (9.6) requires a hardware dongle in order to use. We'll just have to settle with extracting the raw files. After extracting the agent cores, we can see the RCS supports a large variety of devices.

We'll focus on the windows agents for now, and try to see exactly what features they support. Straight away we can see there are three levels of agent - Scout, Soldier and Elite. Each level adds more features above the previous level. This is consistent with threat actors such as Duqu, who will install a small backdoor to validate that the target is interesting before deploying the full espionage platform.

The Scout agent is designed as a lightweight agent to be dropped with an exploit. It gathers system information and screenshots, before sending them back to the operator. The 'Scout' will then be upgraded to a 'Soldier' or 'Elite' implant based on an operators decision. All of the agents check if they're running in a virtualised environment before continuing.

Of particular interest is the AntiCuckoo() function, which does some pointer magic to confuse the Cuckoo Sandbox.

Following the virtualisation check, the agents try to determine if there what pieces of software are running on the machine using WMI queries. These are compared against a blacklist, and the agent terminates if it finds any of these:

There's also a set of analysis tools that are blacklisted

Unusually, the agents use shared memory to determine if other implants are running on the same machine, this is different to the normal malware technique of using Mutexes.

The function to create this shared memory mapping uses a variable called 'CLIENT_KEY' that is defined in the configuration file. Unfortunately, this means it's not suitable to create an indicator of compromise.

So what capabilities do these implants actually have? The three levels are summarised below:
Scout:

And finally the 'Elite' agent.

We can see that these implants are primarily designed to gather 'evidence' on a target system, and don't include any of the spreading or network discovery elements of full espionage platforms such as Duqu 2.0 or Regin. This is still a large feature set however, and it is self-evident how this information could be used by a government or state entity.

Moving forward, the next stage of analysis is to build these agents ourselves, and see if we can control them using the leaked backend code. In the meantime, you can enjoy browsing the document set yourselves.

This is the final post in our series on analysing Hacking Team's 'Galileo RCS (Remote Control Sys...

This is the next post in our series on Hacking Team's 'Galileo Remote Control System'. In our pre...